Well hockey folks, we are down to the Final Four, and the Conference Finals in the chase for Lord Stanley! Time to buckle up – we’re getting down to the nitty-gritty now. Who can play through injuries and pain? Who can get the clutch goal-tending, and special teams’ results? Which unheralded player will jump up and become a hero? Many questions, and many more answers coming in the next few weeks. 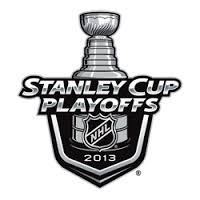 It’s also a special group of teams that remain standing to contest a spot in the Stanley Cup Final. The last four Cup Champions – the Kings from last year, Bruins in 2011, Blackhawks 2010, and the Penguins back in 2009, are all still alive and looking for a second championship in the past five years.

One of these four will go down in history come the end of June. It’s not easy to win multiple Cups in the current NHL. Dynasties are no more. Long gone are the four-straight Stanley Cups of the 80’s Islanders. It’s hard enough to make the playoffs year-in and year-out nowadays, so to have two championships in five years is a rarity. Who will advance and try to pull it off?!

This is an interesting one – and has all the markings of a true battle royal. These teams don’t like each other at all – going back to a certain Cooke hit on Savard – but that’s in the past many moons ago. The Pens were 3-0 against the Bruins in the regular season, but neither team will be thinking of this, as the regular season means nothing now. The big key in this one is discipline. The Pittsburgh power-play is a thing of beauty, and they have a PP goal in 8 of their 11 playoff games thus far. Their offence is also on overdrive as they have 47 goals overall in those 11 games. Zdeno Chara versus Sidney Crosby will be the main match-up for both coaches, but the B’s will have to stay out of the box or this one could get ugly. Plenty of story-lines here – the Iginla trade deadline soap opera, Vokoun trying to continue to carry the mail for the Pens, and of course can Jaromir Jagr stick a dagger in his first NHL team. Stay tuned – this is going to be fantastic!

The Blackhawks have been nothing but class in this shortened NHL campaign. They went the entire regular season without a three-game losing skid, and easily skated away with the Presidents’ Trophy. They finally faced some adversity in the second-round, as they trailed the Red Wings 3-1, and showed true guts in coming back to win that series in OT of Game 7! For their part, the Kings are coming off a tough 7-game set against their California rivals in San Jose. Jonathan Quick is the best goalie left standing in these playoffs, and his home-record thus far is the thing of legend – 7-0, 1.14 GAA, .958 SV%, and three shutouts. There’s also the old adage ‘never bet against the defending champions, until the defending champions are done!’ Can the Kings win back-to-back Stanley Cups? The odds are against them, as no club has been able to do that since the ’97 and ’98 Detroit Red Wings – so no easy feat! This will be a fast-paced and physical tilt – with neither team giving an inch. The Hawks are so deep, and the Kings so very confident – this is why this is truly the best time of the year.

Brent Seabrook was the hero for the Hawks in Game 7 OT vs the Wings:

How did your second round selections work out?! I was 3-4 on team picks. My one mistake – I went for the ‘Hail Mary’ and had the Senators upsetting the Penguins. Well, that didn’t quite work out, but I was spot-on with my other three choices! Who are you going with this round? Let me know, post a comment with your picks, and do you agree with my predictions? Enjoy the Conference Finals wherever you’re watching!