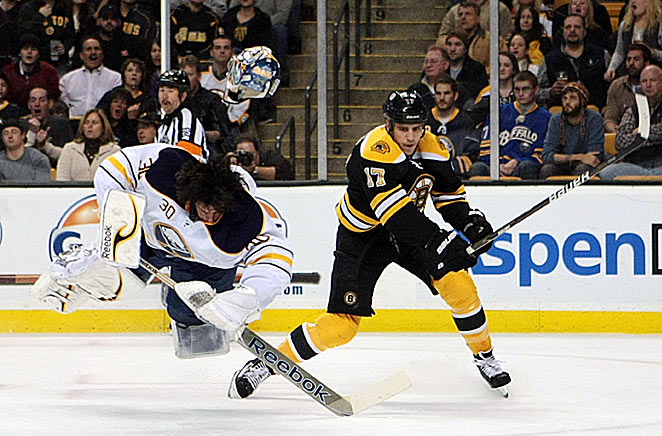 I know one thing that should have happened – right or wrong Saturday night in Boston – someone, anyone in a Buffalo Sabres jersey should have dropped the gloves with the Bruins’ Milan Lucic.

I know, I know, all the bleeding hearts will say “fighting is wrong” and all that, but Milan Lucic got away without as much as a face-wash from the Sabres after barrelling over the diminutive Ryan Miller.

When your keeper is also your best player and he gets run over by a charging winger like that on Saturday night, someone needs to man-up or the whole team looks soft. All the Sabres did was serve notice that they could be pushed around, and even their MVP wasn’t off limits to the Bruins.

I hope Ryan Miller’s resulting concussion doesn’t keep him out of the Buffalo net for too long, but when he does return he may want to ask his teammates why they were gutless and looked the other way in Beantown. He may want to look around that dressing room for answers there instead of calling Lucic “gutless.”

And if I’m a Buffalo Sabre, I’m embarrassed today – not for the 6-2 drubbing from the Bruins…no I’m embarrassed because I let my goalie down and showed the entire NHL that I wouldn’t do anything about such a one-sided hit against my best player.

To add insult to injury for Buffalo fans, NHL Senior VP of Player Safety – Brendan Shanahan – has ruled there will be no further discipline for Lucic. This is the right call due to lack of intent on the play, and the speed at which it happened. So Lucic and the Bruins get a win, Miller is out, and the Sabres have now raised some nagging questions within their own ranks.

Can Ryan Miller really be that unpopular amongst his teammates, or are the Sabres really that soft?

Either way you look at it…Saturday November 12th was an epic fail for the Buffalo Sabres from top to bottom.

2 Replies to “Protect your Goalie! It’s not a suggestion – it’s a rule!”